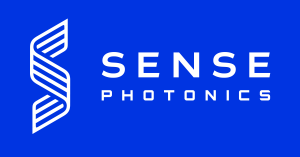 We sat down with Sense Photonics‘ founding team, CEO Scott Burroughs, CCO Russell Kanjorski, and Founding Scientist Brent Fisher. The trio founded Sense in 2016, landing more than $5 million in just nine months while headquartered at Frontier RTP. In 2019, the LiDAR company relocated to a lab-office hybrid in the Park.

LiDAR (light detection and ranging) is at the heart of autonomous technology, and an approach that many industry insiders are betting on. LiDAR uses remote sensing technology utilizing pulses from lasers to detect and measure depth, creating maps to what experts call the 3D point cloud. These maps are possible because photons reflected off of different objects in the field of view are reflected back into a 3D sensor chip behind the lens, generating multiple points.

Existing LiDAR systems are expensive and bulky, looking like spinning tin cans. Scott and colleagues Russell Kanjorski and Brent Fisher have found a way to improve LiDAR systems through what they call Flash LiDAR architecture.

The Flash LiDAR system is based on a laser emitter that sends a high-power flash of light into a field of view, replacing one big laser with 11,000 tiny ones that fire all at once. The all-in-one flash component replaces the traditional point-to-point laser system, enabling the device to capture more detailed images, and a sleeker look for the product itself.

“Investors are attracted by our Flash-LiDAR system, but also because of our location,” Scott explains. “Some specifically decided to invest in us because we’re not in the Silicon Valley.” As autonomy holds the key to the future for multi-industry, many LiDAR startups find themselves in a grueling race to find the next big thing.

The laser emitter is unique to Sense, making its LiDAR system low-cost. “Our laser emitter costs one-one hundredth of one you can buy commercially,” Scott says. And it doesn’t have any moving parts, making it easier to maintain.

The system creates a rich data set, producing high-resolution RGB images and videos. Ambient light suppression and interference mitigation in the 3D sensor chip allow for visibility and flexibility in both light and dark environments.

Sense wasn’t born overnight, but its sprint up the funding ladder is remarkable, landing $5 million after nine months of being founded in 2016, and another $26 million in Series-A funding in 2019. What started as a three-person team is now a 42-person startup headquartered in RTP, with satellite office locations at San Francisco, CA and Edinburgh, Scotland.

An opportunity at a solar panel company brought Scott, Russ and Brent to the Triangle area. However, when the solar company wound-down, the trio decided to merge their expertise and interest in the AV market to create Sense. Their eventual focus on laser technology began simply: Scott had an idea, Russ created a pitch deck, and Brent, an MIT Ph.D. (“He’s the smartest guy in the room,” says Scott), provided concept development for the new low-cost, high performance LiDAR technology.

Scott credits Sense’s early-stage successes to RTP’s culture of innovation and the Frontier Campus. “Free co-working and beer on Thursdays? I’ve been to a lot of places, and I can’t find one like The Frontier.”

“LiDAR is the next-gen for everyday vehicles,” Russ says. But Sense’s LiDAR isn’t limited to the automotive market. Russ forecasts their technology, currently protected by 200 patents, could be used in environmental monitoring, security, retail inventory, and industrial applications. Sense expects to continue to grow alongside the demand for detection mapping.