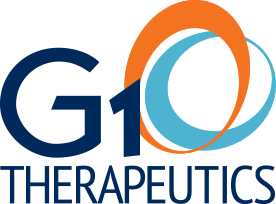 Dr. Jay Strum started working with G1 Therapeutics in 2009. Hired as the founding Chief Scientific Officer of the company, he was also its first employee. He was drawn to the company’s patient-focused mission of improving oncology treatments. “That’s still our primary focus now,” he says.

At that time, Dr. Norman “Ned” Sharpless, who was this year sworn in as Director of the National Cancer Institute (“We’re extremely proud of him,” says Jay), was a professor of medicine at UNC Chapel Hill, and Jay was working in RTP.

“I had been at GlaxoSmithKline for about 15 years, and Ned was looking for someone with discovery and development expertise,” says Jay. He started out at GSK as a research scientist, but over time his work involved leading drug discovery programs in cancer and metabolic diseases.

By the time Jay left GSK, he was a director and had brought several drugs to the clinical development stage. He was also instrumental in the establishment and growth of genomics research at GSK. That research involved developing an international department dedicated to supporting GSK’s programs with gene expression, including on site facilities such as a human tissue repository and a human adipose-derived stem cell lab.

Given this experience, the two began talking about Ned’s idea: a company centered around developing medicines that protect bone marrow from chemotherapy’s toxic effects.

“Being an oncologist and treating patients, Ned noticed that some people just couldn’t handle the doses of chemo they were getting. It was to the point where many patients wouldn’t finish an entire treatment of chemo, so they would have to reduce the dosage or delay treatment in order to help them get through it,” Jay says.

While chemotherapy is extremely effective at treating cancers, delaying treatment or reducing dosage can have a major impact on that effectiveness. “Ned had this idea that we could protect the bone marrow from damage if we transiently arrested it while the patient received chemo. He reasoned this would help keep people on the treatment schedule, lessen the negative impact of the treatment and improve patient outcomes.

That’s where Jay came in: his ability to develop molecules for particular indications enabled G1 Therapeutics to come up with proprietary compounds.

The first, G1T28, also called Trilaciclib, is defined as a “potential first-in-class short-acting CDK4/6 inhibitor in development to preserve hematopoietic stem cells and enhance immune system function during chemotherapy.”  Trilaciclib is administered intravenously as an outpatient treatment prior to chemotherapy, and has the potential to significantly improve treatment outcomes.

“As chemo washes out of the body, our drug also washes out, and allows the bone marrow to start proliferating again and to generate blood cells. We wanted to be able to switch the bone marrow off and back on and have control over that,” Jay says.

The team began working under a facilities use agreement at UNC’s medical labs, and received some initial funding through the UNC KickStart program as well as from the NC Biotechnology Center. By 2014, after a couple of moves within UNC’s lab spaces, they knew it was time to expand.

Jay and Ned, both natives of North Carolina, recognized the value of keeping their work in Research Triangle Park. “I had spent 15 years working right here in the park at GSK, and had done my post doctorate work at Duke, so we definitely realized we were fortunate to have that proximity to the universities,” Jay says. “It made it especially easy for Ned and I to find each other and collaborate, and add personnel with drug development experience to our team as we grew.”

The G1 Therapeutics team has now grown to more than 30 people, and their recent IPO raised more than $105M. “As we evolved from a startup concept to today, being a publicly traded company, RTP has been a particularly good place to grow.”

Jay also notes the quality of life in the area as a major reason to stick around. He and his wife raised two children in Hillsborough, and continue to enjoy the relaxed lifestyle there. “One of the things we’ve always loved about being out where we live in the country, is that it’s only 15 minutes from Duke, but feels like the middle of nowhere.”

Hillsborough as a community holds a special place for Jay as well. “We do a lot of gardening, and last year our yard was a stop on the Hillsborough Garden Tour. We loved meeting so many people,” Jay says. He also appreciates the burgeoning arts and restaurant scenes in Hillsborough and Durham, as well as attending Durham Bulls games and shows at DPAC.

Their location also provided G1 with access to venture capital in the area from Hatteras Venture Partners in Durham. “They really helped get us off the ground, and not just financially,” says Jay. “They helped us find people that could help us build our company, people that had skillsets we needed.”

Although there is an executive team and a management team, the majority of G1 Therapeutics employees are involved in the development and clinical trial areas of the business to support their ongoing studies.

A second drug, G1T38, is now being tested in patients with breast cancer.G1T38 is a potential best-in-class oral CDK4/6 inhibitor being developed for use in multiple combination oncology regimens.

The company is also advancing G1T48, an oral selective estrogen receptor degrader (SERD), which is now in pre-clinical studies. G1 plans to evaluate G1T38 and G1T48 as a potential combination therapy for breast cancer.

As for what’s next? “We’re just thrilled for Ned, as the founder of this company and a native North Carolinian, to become the director of the NCI,” Jay says. “It’s so great that we’ve been able to do what we’re doing right here in the Triangle, and not have to go to Boston or San Francisco–the people who thought up and planned RTP really had some great forethought.”